Armor: As plate and shield, although they are unarmored.

Ancient texts speak of the offspring
of God and Man – the Nephilim, the first heroes of the earliest days.
Maybe in the Real, they were heroes. Maybe the first children of nature and humanity truly were agents of both God and Man: giants among ants, carrying out divine mission on the nascent Earth.
The Nephilim in the ocean tell a different story: one of fear and naïve conquest. Perhaps the biggest separation between Man and the natural order is that man has and always will manipulate. They are guided by ego and lust and not instinct. Man will kill buffalo for the sport, not for hunger. Our greatest achievement was to separate ourselves from the natural hierarchy.
Nature also has its own ways. A man facing a lion will almost always die – but that lion usually has good reasons to kill. Nature is terrifying, and although we understand it, we still cannot face it. Not with our frail, thinking bodies.
Take these two concepts – Man, the manipulator, and God, the natural structure, and combine them. Nephilim in the Ocean were once dominant kings of the natural order. They were the apex.
One day, a Nephilim killed a sailor for food and felt something. They felt a tinge of conquest. Hunger was replaced by lust – by the primal joy of killing, of utterly dominating another. From then on, the Nephilim were no longer animals.
They were not entirely human either – but for every high concept they could not grasp, their love of lust and anger grew. Children, essentially, in the hormonally mutated body of a demigod. Beasts who play with corpses like toddlers play with blocks.

Nephilim are usually about ten to twelve feet tall and look like gigantic muscled humans except for their heads. They are always naked, and completely hairless. Their skin is slick and rubbery like a dolphin. Muscles rope and knot underneath, undulating in constant work.
Their heads are of animals, most commonly early aquatic mammals. These animal heads are different, more primal. Hairless and smooth, forms of future beasts that just crawled out of the primordial ooze.
A Nephilim sees any target as a toy. Their brains are too under-developed to ever truly learn anything, but their young human intelligence drives them to interact.
If you see one, run. They are stronger than you. They will play with your limbs until they get bored or hungry. They can never understand language, but they do understand screams – that means that the toy is weak, and that means that it can be killed.
Seeing a Nephilim in its prime is terrifying but seeing them in weakness is even more so. They bawl with extreme frustration – deep, soul-cutting animal sobs. It cannot be helped. They will never learn. Even with their poor intelligence, they know this. Some deep part of their budding conscience tells them that they are monsters.
Do not remind them of this fact. 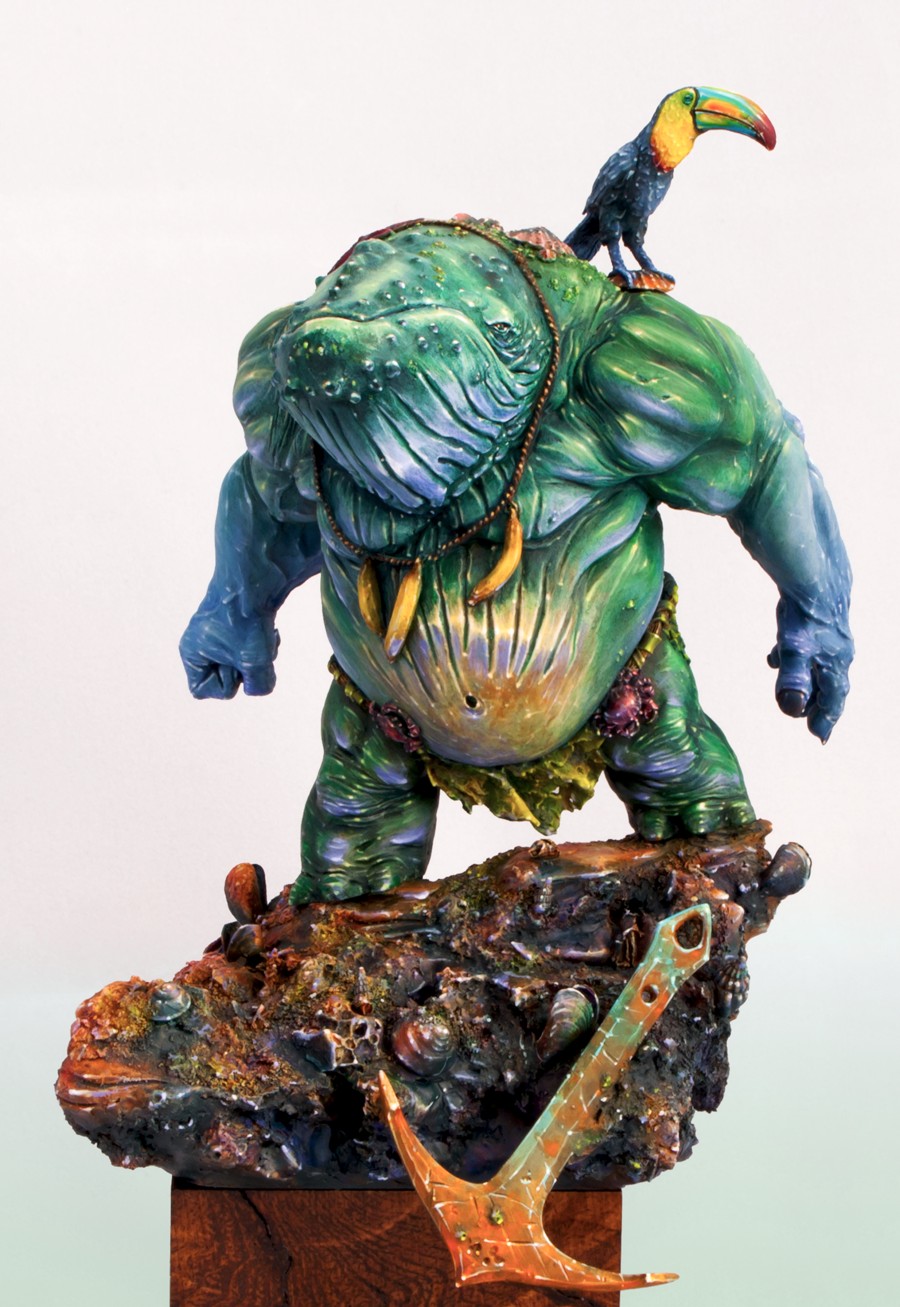 Mawhi, the Whaleman, painted by  Marko Miladinović
Nephilim are bigger than Mawhi here - and they wouldn't be wearing clothes. This is a fine figure, though.

Also this draft has a lot of errors, and I'm for sure not done with it, but I like to keep an archive of ideas how they initially appeared in writing.